The autopsy of an aquifer is called the complex drilling works, connected with his destruction and providing the most favorable conditions for the inflow of water into the well during its development and operation.

For ensuring quality opening of the aquifer during the drilling wells important method of well completion that defines the design of its bottom zone. In practice became the application of basic methods of well completion.

1. The well is bored to the roof of the productive horizon, despise and cement operating a drilling column. Then reveal the aquifer and into the well a drill down filter column (in case if the well is drilled to the Sands), suspended by the packer in the perforation drill column or the column (if the borehole is drilled in Sandstone or limestone).

2. The well drilled the entire thickness of the productive aquifer and it is lowered into drilling production casing having at the bottom of the filter. Using a cuff method cement column above the roof of the aquifer.

Testing of productive aquifers is a set of works related to the detection of water in open horizons. This requires to obtain the water inflow into the borehole, to acquire a sample for laboratory studies of their composition, to measure the flow rate and static water level. 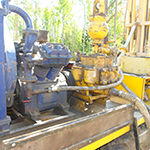 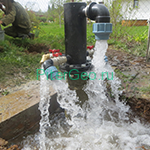 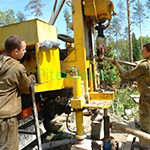 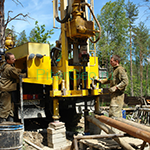 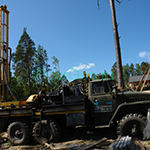 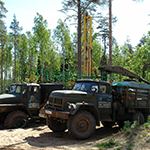